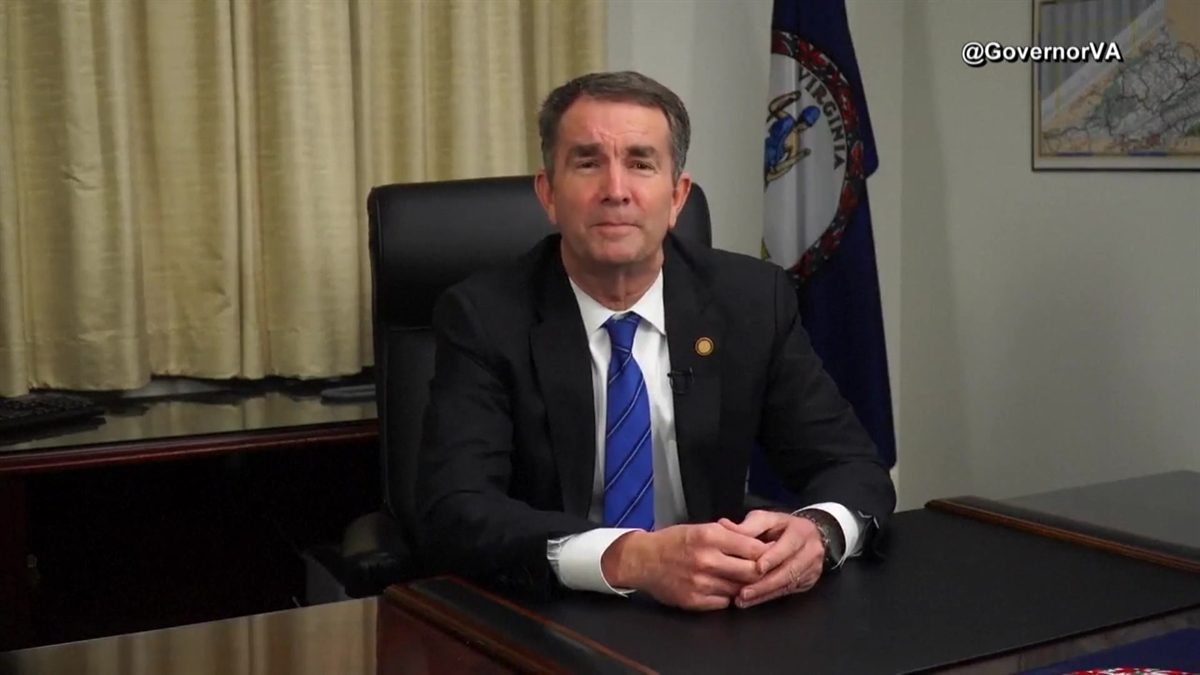 Virginia Gov. Ralph Northam refused mounting calls for his resignation after a photo surfaced on his yearbook page showing people in blackface and a KKK robe, stressing that he “truly” doesn’t believe he was in the picture.

Northam initially planned to resign after apologizing for appearing in the photo and speaking with the Virginia Legislative Black Caucus, but later had a change of heart, the Virginia Democrat told News4 and Tom Sherwood.

“I believed then and now that I am not either of the people in that photo,” he said.

Virginia House Democrats quickly released a statement after Saturday’s press conference, reiterating their call for him to resign.

“We continue to echo the calls of our colleagues in the Legislative Black Caucus for the Governor to resign. Regardless of the Governor’s account of whether or not he was in the photo, he has lost the trust of constituents and elected officials.”

On Friday, Northam apologized for appearing in the photo, which was printed in a medical school yearbook from 1984 on a page titled with his name. It was resurfaced by a conservative news outlet Big League Politics.

“I am deeply sorry for the decision I made to appear as I did in this photo and for the hurt that decision caused then and now,” the Democratic governor said in a statement.

But at the press conference Saturday, Northam said his statements were meant to apologize that the photo was featured on his yearbook page at all as stakeholders reached out with hurt, pain and a flurry of phone calls.

“I take credit for recognizing that this was a horrific photo that was on my page, with my name,” he said. “I have no recollection at all of ever dressing up [in that photo].”

Northam admitted that he did wear blackface during a dance contest in San Antonio when he dressed up as Michael Jackson and said he regretted it.

“I am asking for the opportunity to earn your forgiveness,” Northam said. He suggested the outcry over the photo presents an opportunity to openly discuss racial justice in a state where portraits of slave owners remain in the governor’s mansion and a white nationalist rally protesting the removal of a Confederate statue turned violent, then deadly.

“I believe this moment can be the first small step to open a discussion,” he said.

NBC News was able to locate the yearbook from Eastern Virginia Medical School and find the page featuring the photo. Northam said he never purchased a copy of the yearbook.

Later Friday, he posted an apology video on Twitter, saying, “That photo and the racist and offensive attitudes it represents does not reflect that person I am today or the way that I have conducted myself as a soldier, a doctor and a public servant.”

It wasn’t immediately clear if Northam’s comments at the press conference changed the minds of those calling for him to leave office, including prominent, national leaders and the Virginia Democratic Party.

“We made the decision to let Governor Northam do the correct thing and resign this morning — we have gotten word he will not do so this morning,” a statement from the party said.

They reiterated a call for the governor to step down and allow Lt. Gov Justin Fairfax to lead the state.

“We stand with Democrats across Virginia and the country calling him to immediately resign. He no longer has our confidence or our support.”

Northam initially gave no signal in two public statements that he would resign and said Saturday that he intends to continue working on his agenda for the state.

“I am ready to do the hard work of regaining your trust. I have spent the past year as your governor fighting for a Virginia that works better for all people. I am committed to continuing that fight through the remainder of my term and living up to the expectations you set for me when you elected me to serve,” he said in a video posted Friday night.

It’s unclear how Northam’s future as governor will play out without support from his own or opposition parties.

After Northam publicly said that he appeared in the photo, a wave of calls for resignation crashed onto Richmond from the left and right. Pressure mounted after he met late Friday with the Virginia Legislative Black Caucus.

“We fully appreciate all that he has contributed to our Commonwealth. But given what was revealed today, it is clear that he can no longer effectively serve as Governor,” the VLBC said.

“That might have been the tipping point,” longtime News4 political reporter Tom Sherwood said.

Former Virginia Gov. Doug Wilder, the state’s first and only African-American governor who was elected in 1985, said it is appropriate to criticize Northam.

“It has never been right, in Virginia, nor anywhere else to participate in or condone such mockery or insensitive behavior,” Wilder said in a written statement.

He stopped short of calling for a resignation, saying it’s up to Northam to decide. Later, Wilder tweeted that Northam’s options seem limited.

“It is difficult for anyone who watched the press conference today to conclude that he has any other choice … but to resign.”

“Democrat Governor Ralph Northam of Virginia just stated, ‘I believe that I am not either of the people in that photo.’ This was 24 hours after apologizing for appearing in the picture and after making the most horrible statement on ‘super’ late term abortion. Unforgivable!”

Virginia’s two senators, Mark Warner and Tim Kaine, are the latest Virginia leaders to call for Northam to resign.

“After we watched his press conference today, we called Governor Northam to tell him that we no longer believe he can effectively serve as Governor of Virginia and that he must resign,” they said in a joint statement.

“It is no longer possible for Governor Northam to lead our Commonwealth and it is time for him to step down,” Herring said in a statement. “I have spoke with Lieutenant Governor Fairfax and assured him that, should he ascend to governorship, he will have my complete support and commitment to ensuring his success and the success of our Commonwealth.”

Sherwood reported that Lt. Gov. Justin Fairfax was preparing to take over the governor’s seat before Northam decided against resigning. Fairfax is the second African-American man ever to be elected to statewide office in Virginia and would finish Northam’s term as governor in the event of a resignation.

Fairfax condemned the photo Saturday afternoon and said he “cannot condone the actions” from Northam’s past that “at the very least, suggest a comfort with Virginia’s darker history of white supremacy, racial stereotyping, and intimidation.”

Fairfax did not say explicitly if the governor should resign, but did call for unity.

“At this critical and defining moment in the history of Virginia and this nation, we need leaders with the ability to unite and help us rise to the better angels of our nature,” Fairfax said in a statement.

The Virginia Constitution prohibits a governor from serving two terms in a row. Northam stated Saturday he intends to continue serving his term, which is set to end in 2022.

“We agree with the powerful words of our colleagues in the Virginia Legislative Black Caucus,” a group statement said. “His ability to lead and govern is permanently impaired and the interests of the Commonwealth necessitate his resignation.”

State Sen. Louise Lucas of Portsmouth, a close ally of Northam and longtime African-American lawmaker, told The Associated Press on Saturday black leaders felt “mortally wounded” by the photo and that he has no option but to resign.

“He betrayed us,” she said.

Ed Gillespie, who ran for Governor of the Great State of Virginia against Ralph Northam, must now be thinking Malpractice and Dereliction of Duty with regard to his Opposition Research Staff. If they find that terrible picture before the election, he wins by 20 points!

Democrat Governor Ralph Northam of Virginia just stated, “I believe that I am not either of the people in that photo.” This was 24 hours after apologizing for appearing in the picture and after making the most horrible statement on “super” late term abortion. Unforgivable!

This has gone on too long. There is nothing to debate. He must resign. https://t.co/TjfS3vbcws

My statement with Senators @timkaine and @MarkWarner urging Governor Northam to resign. pic.twitter.com/caAx6Im0Ga

There is no place for racism in America. Governor Northam has lost all moral authority and should resign immediately, Justin Fairfax is the leader Virginia needs now.

This has been a heartbreaking day. Ralph Northam is my friend and he served well as my Lt. Governor and as Governor. His actions on display in this photo were racist, unacceptable and inexcusable at any age and any time.

What Ralph Northam did was unforgivable. Given his statements on the right to life coupled with the most recent revelations, he has lost the moral authority to continue to govern and should resign immediately.

If Governor Northam loves Virginia the way I know he does, he will resign to allow the Commonwealth to focus on its place in addressing the history of slavery and racism in America.

These images arouse centuries of anger, anguish, and racist violence and they’ve eroded all confidence in Gov. Northam’s ability to lead. We should expect more from our elected officials. He should resign.

Leaders are called to a higher standard, and the stain of racism should have no place in the halls of government. The Governor of Virginia should step aside so the public can heal and move forward together.

Unknown Future for Students After Art Institute of California Closes