The victims of the plane crash into a Yorba Linda home on Super Bowl Sunday were identified Wednesday.

Roy Lee Anderson, 85, of Yorba Linda, Dahlia Marlies Leber Anderson, 68, of Yorba Linda, Stacie Norene Leber, 48 of Corona and Donald Paul Elliott, 58, of Norco, were all identified as victims of the crash by the Orange County Sheriff’s Department.

The Yorba Linda neighborhood where a plane crashed into a home and killed five people, including the pilot, is still struggling to cope with the reality of the seemingly random horror that fell from the sky.

Some thought it was the sound of motorcycles racing through the neighborhood, while others assumed the loud boom was an earthquake. Three days later, the neighborhood is still emotionally recovering. 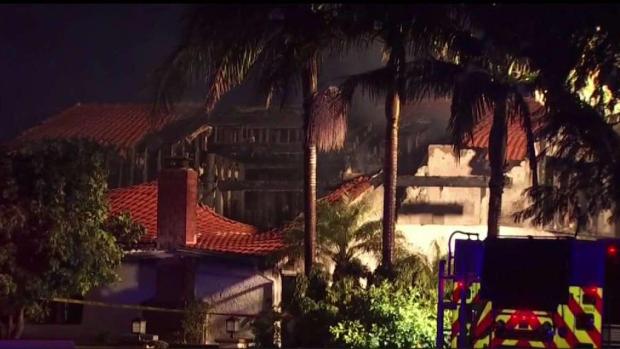 Paul Prichard, who lives in the neighborhood, made an assumption when he heard the sound of branches cracking in his backyard.

“My wife in kitchen, she said, ‘Paul,  we’ve been struck by lightning. It hit the tree,'” Prichard recalls.

There is now a gaping hole in the tall Eucalyptus tree behind their Yorba Linda home, evidence of just how close the Cessna came to landing on them.

“I was more shook up later on when I looked up at that tree and saw how close [it came], maybe 30 yards,” Prichard says.

Prichard ran to his driveway to put out a fire that he initially thought was his car. Then, he surmised maybe an underground vault had exploded. It was neither. It was the wing of the plane.

“Later on, you start thinking,” he says. “That’s when you lose your sleep, when you realize how close we came to real disaster for the whole neighborhood.”

“Something flew over top of my house, over into [the neighbor’s] yard,” Prichard says.

Sue Bacha lives next to the Prichards’ home. Three days later, she says the initial shock is begining to wear off.

“That’s why I’m so hoarse, because I’ve been spending a lot of time crying,” Bacha says.

Sheriff’s deputies confirm four people died in the house, along with the pilot of the plane.

City officials are planning a vigil at Glenn Knoll School Thursday night. It had served as a command post during the initial investigation. Now, it will become a meeting place for a community in recovery and mourning.

Wednesday brought about more signs of reality setting in, as insurance adjusters and some apparent friends of the homeowners stopped by to take photos. And of course, the victims inside the home being identified.

The mayor confirmed that a GoFundMe has been created to help the victims of the plane crash. If you would like to donate to the GoFundMe, you may do so here, but please note that GoFundMe takes a percentage of fees as platform and processing fees.