The Vineyards – a 20-acre apartment and commercial outlet in the San Fernando Valley – is leading the push for green building development with its eco-friendly design. Set to open this spring, the complex will be equipped with solar panels, LED-powered lights, and charging outlets for electric cars.

One of the most noteworthy parts of the development, however, is a network of cisterns placed around the building for rainwater storage.

Shapell Properties Inc., the organization leading The Vineyards’ construction, sees this as a contribution to larger conservation efforts taken up by the state.

A Big Water Saving Mall is Coming to Porter Ranch 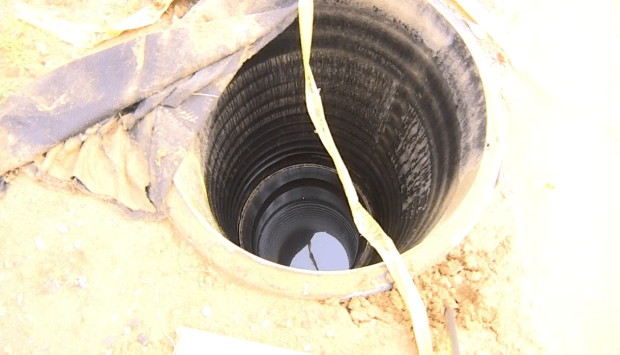 “The governmental authorities…want to retain the water so it doesn’t just run off into the ocean,” said John Love, Vice President for Shapell. “For us, we wanted to be able to use that water.”

By storing runoff rainwater, cisterns prevent water from flowing into sewers and rivers that carry it off into the ocean, where it is no longer usable. The Vineyard would then be able to use the captured water for irrigation, instead of relying on municipal water collectors like dams or reservoirs.

There are about 30 cisterns in total, which collectively hold up to 700,000 gallons of water. That’s about 40,000 gallons more than the standard Olympic swimming pool.

Already, rainstorms from this year alone have the cisterns filled and ready for use.

“We’ll probably be topped off with this coming rain,” Love said. “That much water, when full, should last us about four to five months’ worth of landscape irrigation water.”

The Vineyard is hoping to capitalize on their sustainability goals by applying for LEED and SITES certification. These act as a litmus test of sustainability for building projects.

In most cases, certified buildings are much smaller than The Vineyard, which will feature an AMC theater, Whole Foods, Ulta Beauty and Nordstrom Rack in addition to apartment buildings.

A project applying for LEED certification is scored based off of a grading system recently updated by the U.S. Green Building Council, which oversees the ruling process. Features that may be judged on include relative distance to a transit stop, number of bicycle facilities, and pollution prevention during construction.

Owens believes that The Vineyard faces a unique challenge of being water-friendly in California – a state known for relentless droughts and ludicrous water consumption.

“California is acutely water-stressed – not at the moment but that moment is going to come to an end at some point,” Owen said. “They’ve taken a definitive step to try and address their footprint.”

For The Vineyard, the aim is for an eco-friendly image to attract shoppers that have shifted to online spending. At the same time, they’re hoping that building for sustainability will encourage future complexes to do the same.

“When you have a scaled development like this, you have the opportunity, you have the land to do it,” Love said. “This, I think, will become the rule – not the exception.”

Check out the 4 freshest new businesses to debut in Orange