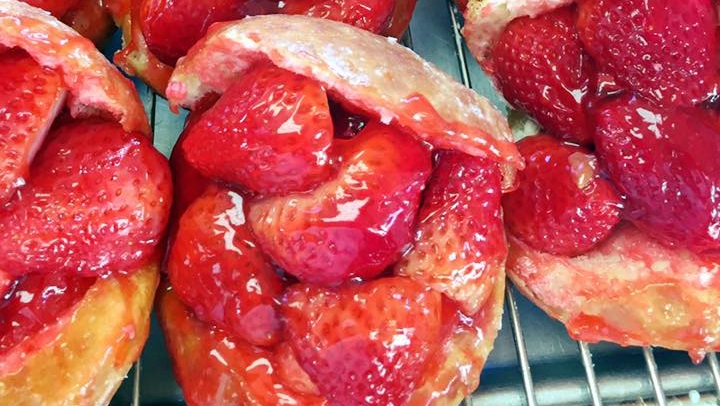 The start of February ’round these parts?

There’s often quite a notable amount of precipitation, as has been the obvious case in 2019. Out in the desert, the wildflowers are starting to awaken in the sandy expanses. And they’re getting ready for the Oscars, in Hollywood.

But there’s another staple seen this time of year, and it involves a fruit that’s associated with sunbeams, spring breezes, and warmer days. Which could be one reason that it is so thoroughly obsessed over, by fans nearby and those fans who donut mind driving a good distance.

Oh, did we say “donut mind” there?

Because we have the sticky, gooey goodies on in our thoughts, obviously. Which is all to say this: Strawberry-loving Southern Californians, it is time to again enjoy a strawberry-centered sweet from The Donut Man in Glendora.

These doughnuts, as glistening as all get-out and as full of strawberries as one of those little green plastic baskets, or just about, have become iconic over the years, and their return to The Donut Man’s shelves is as much as sign of spring’s approach as Punxsutawney Phil seeing his shadow.

Wait, this is California; make that Mojave Maxine leaving her burrow. (Which she still hasn’t done in 2019, nope.)

So go now to Glendora, seekers of luscious and sticky pastries, for one of our region’s ultimate bridges to springtime is now baking daily.

Swim by a New ‘Aquaman’ Exhibit, at Warner Bros.

'Isn't it Romantic' Has Something For Rom Com Lovers and Haters