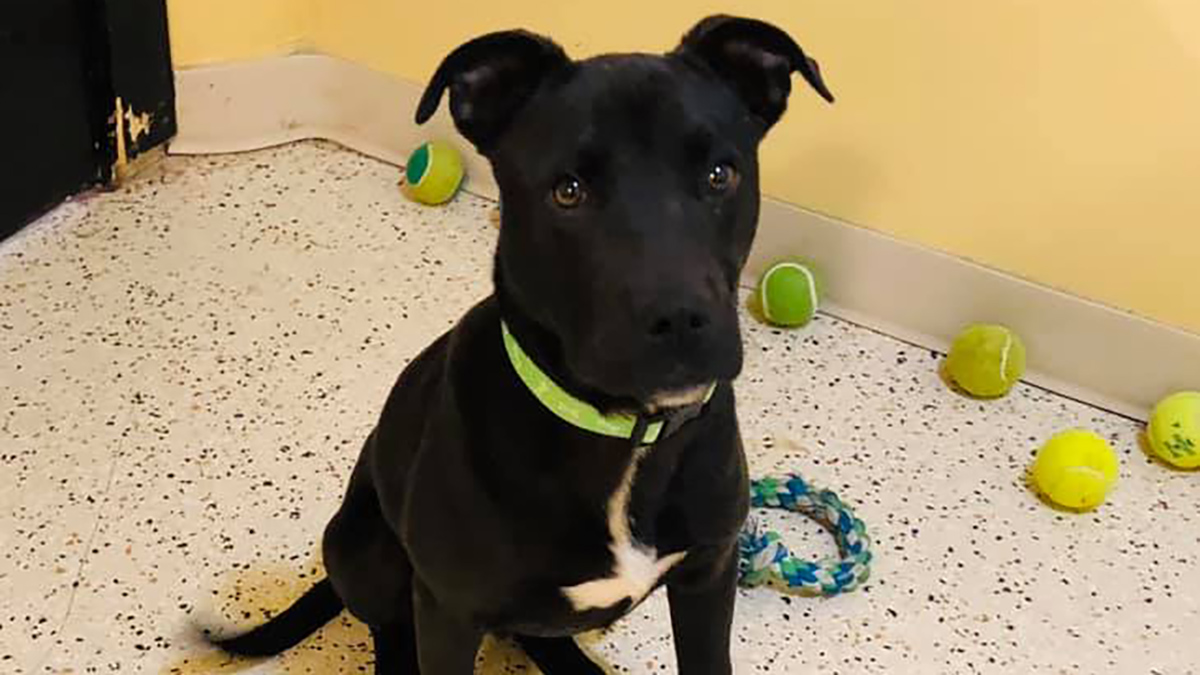 A 7-month-old mixed pit bull pup named Rudolph, who survived an overcrowded shelter that tried to euthanize him, has found his forever home, an animal shelter official said Tuesday.

In a Jan. 16 Facebook post, the Kings Harvest No Kill Pet Rescue Shelter in Davenport, Iowa, described the experience of “this adorable young man” at another shelter. That post has been shared more than 2,000 times.

“Thank goodness the vet said he wouldn’t do it again,” read the Facebook post. “So we brought him to our shelter in hopes somebody would come adopt him and give him a second chance at life.”

Rochelle Dougall, Kings Harvest Pet Rescue’s assistant director, said the shelter partnered with a non-profit rescue organization called Save Our Strays to rescue Rudolph from his previous shelter and transport him to Iowa.

Dougall would not name the previous shelter; Kings Harvest often volunteers to take dogs that might be euthanized at other shelters because of overcrowding.

Although Dougall said it was the first time her shelter had heard of a euthanized dog waking up, similar cases have occurred with other shelters across the country.

In 2018, one Texas dog was left blinded after a failed euthanasia attempt, CBS Austin reported.

“Euthanasia is usually just an overdose of anesthetic,” Dougall explained. “You have to hit the vein and you have to make sure you give enough. It could have been a combination of missing the right spot or not giving enough, so that he just went to sleep and woke up.”

Dougall said that the shelter’s veterinarians assured Rudolph was in tip-top shape. The only notable trait was that Rudolph “had a serenity to him,” which Dougall said was “quite unusual for a little pup.”

But the puppy’s calm personality transformed when Davenport residents Joyce Valentine, her 24-year-old son, Mitch, and his best friend entered the shelter on Jan. 18.

“He was just the sweetest little thing, and it seems like he really took to Mitch right away,” Valentine said. “[Rudolph] interacted with them, he started playing with them.”

Valentine said that because she’s a nurse, Rudolph’s traumatic experience “really tugged at [her] heart.” The family has since dubbed the puppy Rudy.

“He is such a strong little guy,” Valentine said. “And I was really hoping that I’d get to be apart of his story and his life, and give him the best life that I can.”

Despite the dozens of applications, calls and Facebook messages the shelter received about adopting the dog, Dougall said the decision about Rudolph’s new family really rested with the pup himself. Dougall said the puppy “really lit up and just instantly connected” with Mitch.

The shelter also wanted to ensure that Rudolph ended up with a local family, in accordance with the shelter’s adoption contract.

Since his adoption, Rudy has even won over Valentine’s 4-year-old rescue pit bull, Thatchet.

“We have dubbed him as the ‘doggy dad,’” Valentine said. “They sleep together, they cuddle up together, they play really well together. Thatchet is really quite gentle with him.”

Valentine said Rudy has already proven to be “such a smart little dog” by learning new commands every day. He’s already learned the hand commands for sit and down.

“I just encourage people to adopt a dog,” Valentine said. “Most of them are just wonderful little guys, and they deserve a happy and healthy home.”