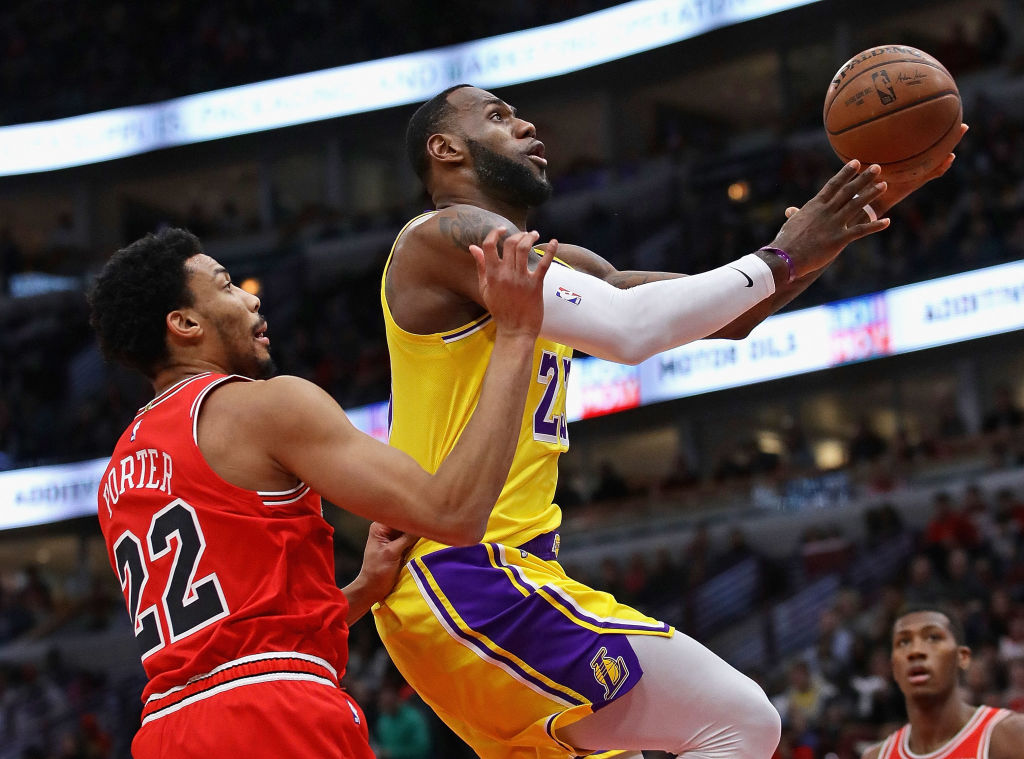 In the house that Jordan built, LeBron James was King.

James scored 36 points and grabbed 10 rebounds as the Los Angeles Lakers snapped a five-game losing streak with a 123-107 victory over the Chicago Bulls on Tuesday night at the United Center.

“I definitely recognize the greatness that Mike [Michael Jordan] had in this city,” said James of playing in Chicago. “Everytime I play here I look in the rafters and look at his jersey retired.”

Los Angeles trailed by as many as 20 points in the first half, but they rallied in the second half with an offensive explosion to defeat the lowly Bulls.

The Lakers laid an egg in the first quarter. After jumping out to a 2-0 lead, the Lakers fell apart, scoring just 16 total points in the frame, trailing the Bulls, 34-16, after one.

Led by the second unit, the Lakers exploded in the second quarter, scoring 39 points and cutting the Chicago lead to just five at the break.

“We got defensive stops. We made some shots,” James told reporters of the second unit that got the Lakers back in the game. “We were very in-tune with what we needed to do defensively and our second unit guys came in with a lot of energy and effort.”

If the second quarter was good, the third quarter was even better, as the Lakers scored 43 points, and ended the quarter on a 27-5 run to take a 14-point lead into the final frame.

The Bulls cut the Lakers lead to four points in the fourth quarter, but James made sure the Lakers walked away with the victory, sinking a three-pointer, and finishing a fast break with Josh Hart with a highlight-worthy reverse dunk from a pass off the backboard.

Thanks to James, the Lakers were able to pull away from there, and cruised to their first victory since they defeated the Pelicans, 125-119, on Wednesday, February 27.

“He wants to win. He’s one of the great winners our league has ever seen,” said Lakers’ head coach Luke Walton. “He did a really nice job of helping us get a win tonight.”

Kentavious Caldwell-Pope sparked the second unit with 24 points, six rebounds, and four three-pointers off the bench. Kyle Kuzma had 21 points.

“Anytime you get a win in this league, especially after the drought we were in, losing five straight, it feels good,” said Kuzma. “We started having fun tonight. Everybody just had joy for the game. We were happy for each other. It felt like everyone got shots tonight.”

Rajon Rondo and JaVale McGee both had double-doubles, with Rondo scoring 14 points and dishing out 10 assists. McGee scored 10 points and grabbed 11 rebounds.

All five starters scored in double figures for the Bulls, as Robin Lopez led the way with 20 points. Otto Porter Jr. had 19, Kris Dunn 18, Ryan Arcidiacono contributed 14, and Lauri Markkanen finished with 11 points.

The Lakers bench outscored the Bulls bench 33-to-25.

Andre Ingram, the 33-year-old sophomore who was signed to a 10-day contract on Monday, played two minutes, attempting one field goal, but received a standing ovation from the Chicago crowd at the end of the third quarter.

The Lakers will travel to Canada where they will take on the playoff-bound Toronto Raptors at 5:00PM PT on Thursday.

Dems Push Ahead With Measure Against Trump’s Declaration