Convicted sex offender and former comedian Bill Cosby said his attempts to showcase equality on television led to his 3-to-10-year prison sentence and fall from grace as “America’s Dad.”

In his first message from prison, the 81-year-old, who was declared a sexually violent predator by a Pennsylvania judge, told NBC10’s Erin Coleman that he is a victim of “entrapment” carried out by a “low-life District Attorney” and “corrupt Judge.”

Cosby shared his comments with his wife, Camille, after NBC10 aired a two-part interview Monday and Tuesday with his spokesman Andrew Wyatt about Cosby’s life at Pennsylvania State Correctional Institution Phoenix in Collegeville, Pennsylvania. In that interview, Wyatt shared how Cosby washed his meals before eating them and wakes up at 3:30 a.m. to do calisthenics in his cell.

Cosby was convicted in April 2018 of drugging Andrea Constand and sexually assaulting her inside his Cheltenham, Pennsylvania, home in 2004. The judgment came after years of public and private statements by dozens of women who claimed they were abused by the actor best known as the patriarch of the Huxtable family on NBC’s “The Cosby Show.” More than 60 women accused Cosby of assaulting them over five decades.

Constand, a former women’s basketball coach at Temple University, went to police a year after the assault, but the Montgomery County District Attorney declined to file charges. A decade later, the case was reopened and Cosby was arrested and charged.

Constand said the conviction allowed her to make peace with the assault.

“He needs help and he needs to repent for what he did, not only to me but for a lot of women,” she told NBC News’ Kate Snow after the trial. “He’s a convicted sex assaulter, but I forgive him for what he did to me.”

Cosby’s conviction was hailed as a victory for sexual assault survivors. Several of Cosby’s accusers attended the trial, which gripped the nation’s attention for several weeks, at the Montgomery County Courthouse in Norristown, Pennsylvania.

“It’s also a victory for all sexual assault survivors, female and male. It’s a victory for womanhood,” Lily Bernard, one of his accusers, said at the time. 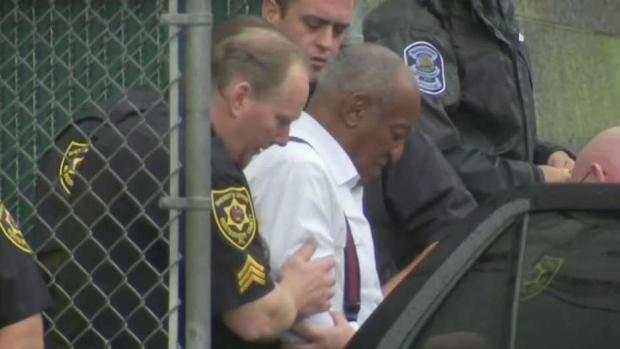 Despite the conviction and sentencing of 3 to 10 years behind bars, Cosby said in his message to NBC10 that he will “never have remorse.”

“My political beliefs, my actions of trying to humanize all races, genders and religions landed me in this place surrounded by barb wire fencing, a room made of steel and iron,” the message, passed along to NBC10 from Cosby through Wyatt, read in part.

Cosby has maintained that his encounter with Constand was consensual. He recently settled a civil lawsuit brought by Constand for nearly $3.4 million. He considers himself among “some of the Greatest Political Prisoners” including Dr. Martin Luther King Jr., Mahatma Gandhi and Nelson Mandela.

“I stand upright as a Political Prisoner and I Smile. The Truth is Strong!”

Here’s the message in full:

I heard about Ms. Coleman’s (NBC 10) interview from the residents here. Here’s why I, [Mr. Cosby] have “no” remorse and will never have remorse. I was given a deal; I settled out of court for $3.8 million dollars; I waived my 5th amendment rights; I was declared Not Guilty in 2005 by the Commonwealth – never charged. However, a low-life District Attorney and a corrupt Judge needed me Guilty now. Not for justice, but for their political aspirations. They say, Mr. Cosby you must attend these classes. Why? One word. Entrapment! My political beliefs, my actions of trying to humanize all races, genders and religions landed me in this place surrounded by barb wire fencing, a room made of steel and iron. So, I now have a temporary residence that resembles the quarters of some of the Greatest Political Prisoners – Martin Luther King, Jr., Mahatma Gandhi, Nelson Mandela, Randal Robinson, and Dr. Benjamin Chavis. I stand upright as a Political Prisoner and I Smile. The Truth is Strong!”