A Carlsbad woman who accused Kellen Winslow, Jr. of a sex crime while they were sitting in the same gym hot tub took the stand for a second day Thursday.

The former NFL player and son of Chargers great Kellen Winslow, is accused of raping or sexually assaulting five women in separate incidents ranging from May 2018 to earlier this year.

The woman identified in court as Jane Doe 5 said she was in the hot tub at the Crunch fitness location on Feb. 22 when a man came out of the men’s locker room wearing only a towel often used by patrons to wipe down machines.

“He came and sat right by my side,” she said. Winslow allegedly sat about 18 inches away from her. “I couldn’t do anything. I guess when you’re so afraid you just kind of frozen. You can’t move, you can’t do anything. I’m just sitting there.”

“His hand was down in the water, and all I notice is his arm,” she said.

The hot tub jets were on and Jane Doe 5 described a layer of foam in the water, making it difficult to see under the water.

Then she said Winslow touched her.

Jane Doe 5 said she moved toward the wall to try and avoid him.

On Thursday, the woman’s husband testified about what he saw at the gym that day in February.

“He was standing up,” Robert C. said. “And I saw he only had a small towel covering up where a bathing suit should be and wasn’t.”

Under cross-examination, the defense asked the witness if he knew Winslow was a football player the day of the incident. The witness said he knew about Winslow’s background only after the couple reported the incident with the gym’s manager.

Gym employees were called to testify regarding the incident.

Shelley Traa spoke with the member who reported a male member exposing his penis at her while they were exercising.

“He was opening and closing his legs and thrusting and showing his genitals,” Traa recalled hearing from Jane Doe 5.

Brad Moser, the general manager, said he recognized Winslow because the defendant was at the gym almost every day.

Moser and Traa reported Winslow to the owners of the gym to pursue cancellation of his membership. Traa said they also reported the incident to the San Diego County Sheriff’s Department. 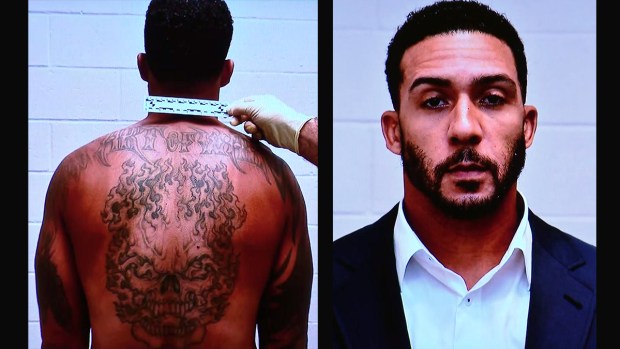 Last week, an Encinitas woman who claims a man exposed himself to her while she was gardening testified she did not look at the man’s face

The woman, identified in court as Jane Doe 3, spoke in Vietnamese from the witness stand and her testimony was translated by a court-appointed interpreter.

“The day I was cutting flowers, and then I saw him, I was walking toward the orange tree and then he was following me, and then he took his pants, and then exposed his penis to me,” Jane Doe 3 testified.

She told jurors when she realized what was happening at her Lake Drive home on May 24, 2018, she didn’t want to look at the man’s face.

“Because he came to my house and he took off his pants and showed me his penis. That’s very sick,” the woman testified.

She said it was the second encounter with a man who called himself ‘David’ who lived on her street.

Jane Doe 3 testified it’s part of the Vietnamese culture not to look directly at a stranger. That’s key, because she never got a look at the suspect’s face.

She described him as a black man, with tattoos from his shoulder to wrist. The defendant has arm tattoos.

Under cross-examination, defense attorneys pointed out that she estimated the man to be a few inches taller than her, maybe 5-feet, 8-inches tall or 5-feet, 9 inches tall. The defendant is 6-feet, 4-inches tall.

She was the third woman in as many days to testify in the case regarding sexual assault, rape and lewd conduct.

“He seemed like a friendly acquaintance,” a woman identified in court as Jane Doe 2 said Wednesday. She appeared soft spoken and visibly nervous as she answered questions about the time she got into the car of a man she recognized and was offered money for sex and then raped.

Jane Doe 2 was 59 when she entered the SUV of a man she knew as “Kevin” on May 13, 2018 on Vulcan Avenue. She said he drove her to a dark area on Manchester Drive, put his hands around her throat and threatened to kill her.

Prosecutors argue that “Kevin” is Kellen Winslow, Jr. and have told jurors the former professional football player preyed on several women in close proximity to his Encinitas home.

The defendant’s attorneys argue the sex between their client and his accusers was consensual.

Jane Doe 2 told jurors she was homeless when she first met the man she knew as “Kevin” and when they saw each other 5 to 7 times, he was always friendly and offered her food.

Under cross-examination, she said she voluntarily got into the SUV but thought they were going to get coffee. She testified he drove to a dark area on Manchester Boulevard and offered money for sex but she declined. That’s when she said she was assaulted.

On Thursday, a nurse testified about markings found on alleged rape Victim Jane Doe 2. She confirmed those marks could have been from consensual sex.

Jane Doe 1, 55, testified last week she was hitchhiking when she was picked up by a man who called himself “Dominic” and driven to a shopping center parking lot where she was raped in the vehice. At an earlier court hearing, Jane Doe 1 incorrectly identified her attacker by pointing to the defense attorney instead of the defendant.

Jane Doe 1 told jurors she has been sober for 30 years, however, defense attorney Marc Carlos asked about her 11 arrests for public intoxication.

Prosecutor Dan Owens said the woman’s desire to hide her drinking should not obscure the fact that she was attacked.

Drafted No. 6 overall in 2004 by Cleveland, Winslow broke his right leg in his rookie season then sustained a serious right knee injury in a motorcycle accident that offseason.

He played for Cleveland, Tampa Bay, New England and the New York Jets.