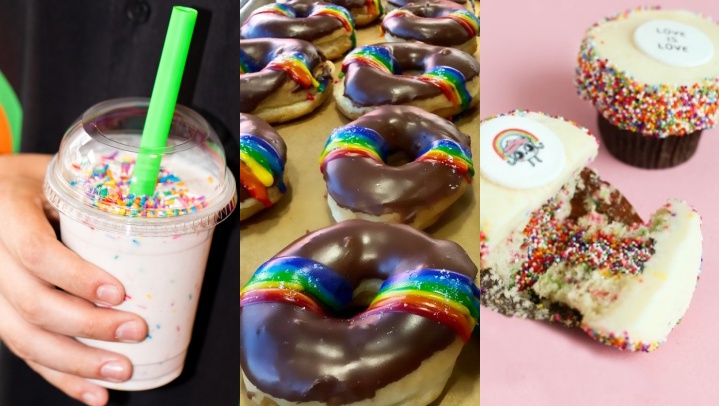 You’ll want to keep noshing during allll of that, and splitting yummy things with co-revelers, and sharing a doughnut with a buddy, and feasting, as we all like to do when a great festivity is afoot.

Pride Week is such a festivity, and one becoming more and more beloved for its foodie-forward spirit, too.

And if you’re more of a sweet-toother, when it comes to Pride-related eats, you’re in some kind of luck, for a few frosting-covered cupcakeries, bakeries, and dougnuteriums around SoCal are honoring the momentous moment.

And while many of the parties, concerts, and the big parade will be centered around West Hollywood through the second weekend in June, you may want to head further afield, for the…

Sprinkles Cupcakes… Pride Cupcake, a $4.95 treat topped with Cuppy, of Cuppy, The Good Advice Cupcake. Messages atop the birthday cake cupcakes include “Love Is Love,” and a portion of the proceeds will support The Trevor Project, “the leading national organization providing crisis intervention and suicide prevention services to lesbian, gay, bisexual, transgender, queer & questioning (LGBTQ) young people under 25.”

Milk Bar‘s… Pride Month Birthday Shake will also be raising funds for The Trevor Project, so definitely stop by the shop from June 7 through 9 to purchase the sip-ready, do-something-good goodie. There are several happenings at Milk Bar during Pride Week, actually, including a cooking glass and a Truffles the Truck presence in the LA Pride Parade on Sunday, June 9. For all of the goings-on, check Milk Bar’s social.

Shake Shack… has a flavorful Pride Shake, for the second year, and will also be giving attention, love, and support to The Trevor Project. On top of the Pride Shake? Look for glittery sprinkles (they’re rainbow, in hue). It costs $5.69 and will be available at Shake Shacks throughout June. The burger/shake company also have a special capsule collection for sale, in the merch area, so look for the laser-cut acrylic rainbow burger chain (ISLYNYC) and other items.

Trejo’s Coffee & Donuts… will features some rainbow-tastic treats for Pride Week, which also happens to be when National Donut Day takes place. Thinking of showing with a dozen for your office? Swing by the Hollywood shop for a box filled with photo-ready Pride Donuts (the frosting is chocolate or vanilla).

Humphry Slocombe, which scoops up some memorable ice cream flavors, will feature a line-up of lively treats in June, including the Queer Eye Cookies & Graham. Thinking of going for the Juanita MORE! flavor? A dollar from each sale will help the GLBT Historical Society.

Timeline: Key Moments in the History of the Death Penalty in California

Get Ready to Howl at the Super Blood Wolf Moon