A female LAPD commander charged in an off-duty alcohol-related incident in Glendale has initiated legal action against the City of Los Angeles, alleging she has been unfairly punished because of her gender and the race of a male companion.

Nicole Mehringer’s government claim, made public Thursday, also accused the LAPD of, “disparate treatment,” during her administrative trial. Mehringer claimed at least six other LAPD officers, including an assistant chief and two commanders, kept their jobs and rank after they committed more serious alcohol-related violations, the claim said.

Mehringer’s attorney, Brad Gage, alleged in the claim that the LAPD was intentionally delaying the release of the administrative trial transcript in order to limit Mehringer’s ability to appeal its findings in LA Superior Court.

The administrative trial panel, called a Board of Rights, recommended in December that Mehringer be terminated as the result of the April 2018 incident in Glendale, during which she was found asleep in the passenger seat of an unmarked LAPD sedan. 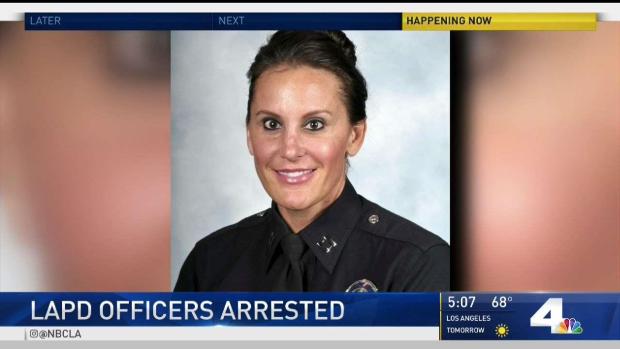 Mehringer’s lawyer said last year he tried to convince the Board of Rights that his client was being treated more severely than other officers who kept their jobs after doing much worse.

“I believe that my client is being treated differently than the male employees,” Gage said. “I believe there’s evidence that male employees have been charged with greater allegations and not even been disciplined at all.”

Mehringer submitted a document to the Board of Rights, an official familiar with the case confirmed to NBC4, that named a number of high-ranking LAPD officers who had allegedly been involved in DUI crashes, arrests and other incidents involving alcohol intoxication.

The document made a variety of accusations that those incidents were better covered-up by the LAPD, and therefore, were not known to the public, according to the official.

The Mehringer incident on April 27 in Glendale was widely publicized. A portion of the incident was recorded on cellphone video by a bystander. It showed her being led out of the passenger side of a Dodge Charger sedan by several police officers.

Glendale officers also made several audio recordings of the encounter, according to a legal document. The Los Angeles County District Attorney’s Office charged Mehringer in September with one misdemeanor count of public intoxication, according to a criminal complaint. She pleaded not guilty.

She also filed a government claim against the city of Glendale in October that alleged her arrest was improper.

The claim accused unnamed Glendale police officers and two sergeants of false arrest, false imprisonment, defamation, and other alleged harms during the incident on Brand Boulevard. A claim generally has to be filed before a city can be sued in state court.

The Glendale Police Department said it generally does not comment on pending lawsuits or legal cases.

An LAPD sergeant who worked with Mehringer has pleaded not guilty to DUI charges stemming from the same incident. James Kelly was allegedly asleep in the driver’s seat of the Dodge. He also pleaded not guilty.

After Parkland, Students Fight for Their Rights — Life, Liberty and the Pursuit of Happiness