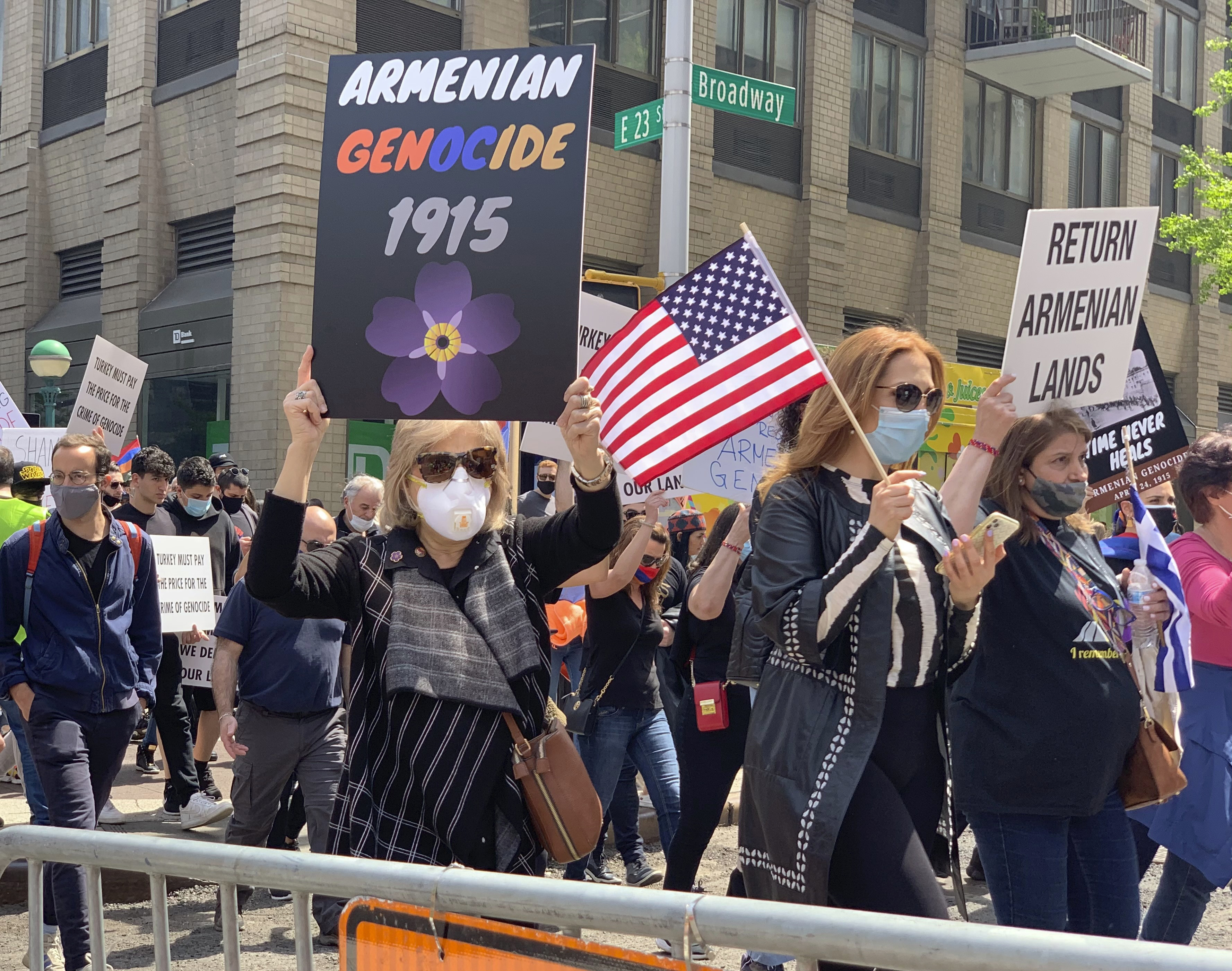 Armenian Americans celebrated the news Saturday that President Joe Biden formally declared the systematic killing and deportation of hundreds of thousands of their ancestors by Ottoman Empire forces in the early 1900s to be “genocide,” saying the recognition was long overdue.

His action came after decades of activism, most of which was centered in California, home of the largest Armenian community in the nation.

“He’s the first American president to have the guts to talk about it. I never understood why the U.S. waited this long when they knew the truth about what happened. It’s amazing and I’m very happy he did what he did,” said Varoujan Kioudjian, 74.

He was among hundreds of people who streamed to a hilltop monument in Montebello, about 10 miles (16 kilometers) east of downtown Los Angeles, to mark Armenian Genocide Remembrance Day.

Dressed in black for the solemn ceremony, they laid flowers around a tomb and said prayers for the estimated 1.5 million Armenians who were killed in the events beginning in 1915 known as Metz Yeghern.

Kioudjian said for as long as he can remember his late father, whose parents were killed in the genocide and grew up in an orphanage, took him to memorials and demonstrations every April 24. That was the day in 1915 when Ottoman authorities began arresting Armenian intellectuals and community leaders in Constantinople, now known as Istanbul.

“The day April 24 comes around, tears flowed from his eyes, from his heart. It was that sad,” he said.

Outside the Turkish consulate in Beverly Hills, several thousand people blocked off Wilshire Boulevard, the main artery through the city, to demand that Turkey recognize as genocide the events that began 106 years ago. The demonstrators waved the national flag of Armenia and called for reparations.

Taleen Nazarian, 22, said at the rally that activists like herself have built their identities around fighting for recognition.

“We feel this passion to continue the fight for justice … and do everything we can to pass it down to the next generation,” she said.

She said she was gratified by Biden’s proclamation.

“It’s still surreal that the day we’ve been fighting for finally came,” she said.

“None of the conditions defined by the international law have been met that would warrant the use of ‘genocide’ concerning the events of 1915,” Oguz said in a email. “Today’s statement will hurt our bilateral relations and undermine dialogue efforts for peace and stability in the region.”

The White House had avoided using using the term genocide for decades for fear of alienating Turkey, a NATO ally and important power in the Middle East. Biden followed through on a campaign promise to make human rights a central guidepost of his foreign policy. He argued last year that failing to call the atrocities against the Armenian people a genocide would pave the way for future mass atrocities.

“Today is an historic and emotional day for the Armenian people, including members of my own family who are descendants of genocide survivors,” state Sen. Andreas Borgeas, a Republican from Fresno, said in a statement. “After more than a century, the United States has mustered the courage to acknowledge the truth despite the potential political consequences with the Republic of Turkey.”

Rep. Adam Schiff, a Democrat from Los Angeles, praised Biden for following through on his pledge.

“This is a momentous day for thousands upon thousands of my Armenian American constituents who have been working, advocating, and praying for recognition for their entire lives – and I am heartened that this announcement comes at a time when there are still some genocide survivors alive to witness it, though their numbers are very small,” he said in a statement.

The survivors, many of them orphans who were brought to the United States, were recognized by California Gov. Gavin Newsom, who proclaimed Saturday a “day of remembrance of the Armenian genocide.”

“Forced to build new lives in all corners of the globe, Armenians bravely forged ahead in the face of unimaginable tragedy. Thousands made their homes in California, and we are greater for their contributions,” the proclamation states. “Today and every day, let us recommit ourselves to making certain that we never forget the Armenian Genocide, and that we always speak out against hatred and atrocities anywhere they occur.”

NewsConference: Too Crowded to Run for President?