After Parkland, Students Fight for Their Rights — Life, Liberty and the Pursuit of Happiness - Los Angeles News 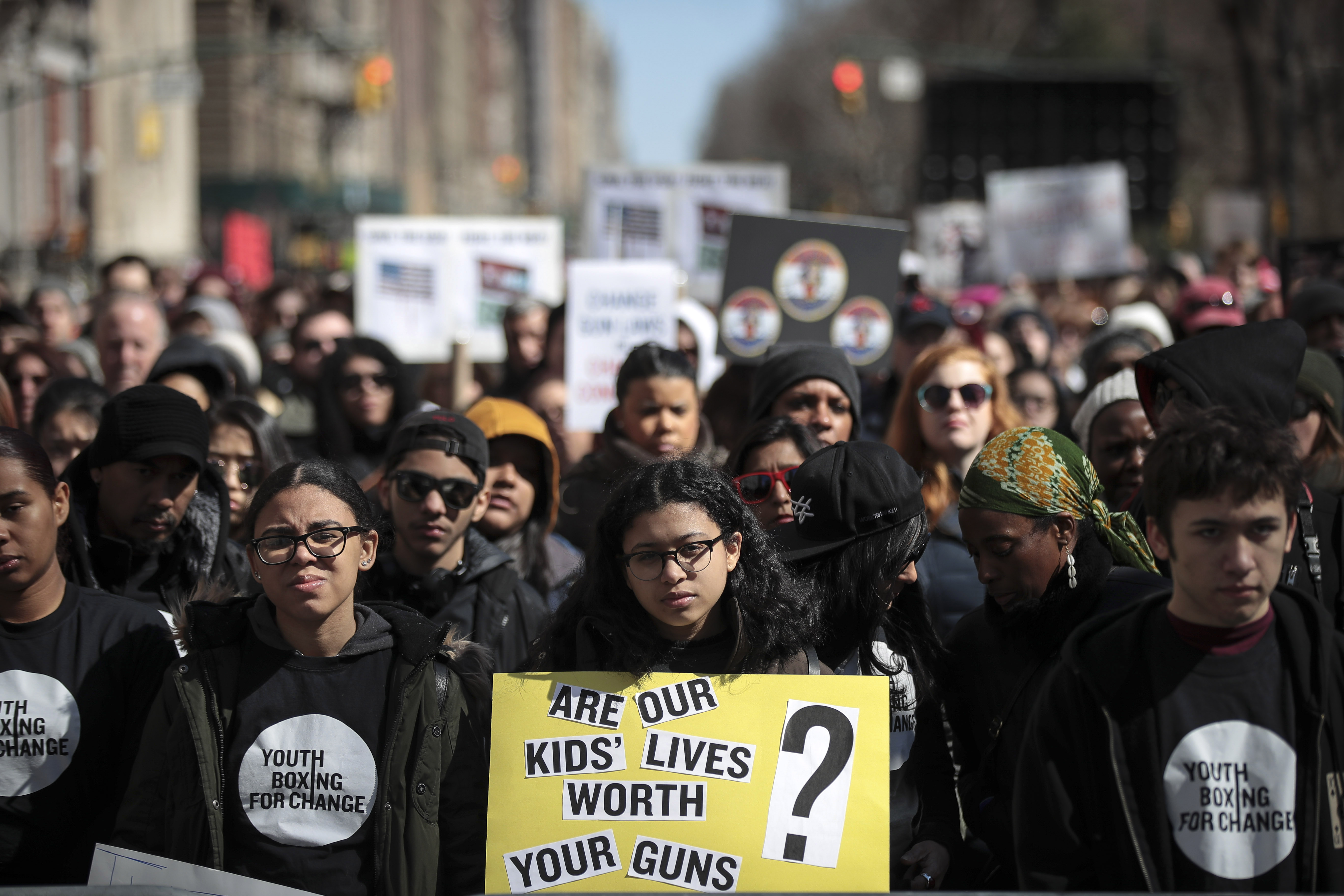 After a teenaged gunman killed 17 students and adults in Parkland, Florida, Jai Patel helped to organize Jersey City, New Jersey’s, March for Our Lives, the demonstrations against gun violence that burst out across the country last year, spurred by the survivors of the Valentine’s Day shooting.

The 19-year-old Patel said that the children who lived through the massacre at Sandy Hook Elementary School in Newtown, Connecticut, in 2012 were too young to demand justice but that his generation was not. He became even more determined last month when he and his friends found themselves running from bullets after a fight broke out at a mall in Jersey City.

“It was crazy,” he said. “The first gunshot went off and you’re frozen solid to the ground. You’re like, ‘What am I supposed to do now?'”

He hid in a store bathroom, angry at how guns, whether used in gang-related shootings at malls or mass shootings in schools, offices, churches and synagogues, have traumatized him and his peers.

“Your right to own a gun should not infringe on my right to live peacefully,” said Patel, now a first-year student at Rutgers University and the founder of the Hudson County, New Jersey, chapter of Students Demand Action for Gun Sense in America, an offshoot of Moms Demand Action.

That point was central to a manifesto by the students from Parkland’s Marjory Stoneman Douglas High School, who wrote that giving civilians access to soldiers’ weapons was a “gross misuse” of the Second Amendment that endangered their rights to life, liberty and the pursuit of happiness. The Parkland shooter used an AR-15, a type of gun favored by many mass murderers.

“I think that it was genius on their part to frame it that way,” said another student, Alanna Miller of Southlake, Texas, outside of Dallas, and a volunteer for Students Demand Action there.

Kris Brown, the president of the Brady Campaign to Prevent Gun Violence, said that the students’ decision to set their inalienable rights as spelled out in the Declaration of Independence against the Second Amendment was a key to shifting the debate. Last year, a record number of candidates sought her group’s endorsement in the midterm elections — it backed 70 in all — and many Democrats in particular ran on strong gun violence prevention programs.

“The narrative that had been owned by the NRA for a long time is, ‘Don’t do anything to infringe on my constitutional rights,’ meaning the Second Amendment right to own a gun,” Brown said. “What these kids are articulating is, ‘Do something to protect my fundamental rights to life, liberty and pursuit of happiness.’ Those are fundamental rights too and I think that has sparked something that is very gut level, and very basic with kids, who frankly feel afraid.”

Polls show that young people care more about the issue of gun violence than older Americans. An NPR/PBS NewsHour/Marist poll in October found that 5 percent of all registered voters listed guns as the most important factor in deciding their vote in the midterm elections, but among 18- to 29-year-olds, that number rose to 13 percent.

An examination by the Giffords Law Center to Prevent Gun Violence found that of the dozens of gun safety bills passed in 2018, 67 measures enacted in 26 states and Washington, D.C. would have an impact on gun-related deaths and injuries. Click on one of the red or blue colored states for more.

Polling done by Tufts University’s CIRCLE, or The Center for Information and Research on Civic Learning and Engagement, around the midterm elections found that 56 percent of 18- to 24-year-olds said they supported the gun-violence prevention movement. Those who identified as supporters or members of the movement were both more likely to report voting — 65 percent of supporters said that they had voted — and being contacted by campaigns and candidates, said the center’s director, Kei Kawashima-Ginsberg. More than half of young Americans paid attention to the shooting at Marjory Stoneman Douglas High School, and slightly less than half, 43 percent, said it affected whom they voted for, at least somewhat, she said.

Last year was a deadly one. Besides the Parkland shootings, 10 people died at Santa Fe High School in Sante Fe, Texas, five staff members at the Capital Gazette newspaper in Annapolis, Maryland, 11 people at the Tree of Life Synagogue in Pittsburgh and another 12 at the Borderline Bar and Grill in Thousand Oaks, California.

A team of more than 200 student journalists assembled by The Trace, a nonprofit news organization that reports on gun violence, and working with the Miami Herald wrote stories about 1,200 young people 18 and younger who were killed since the Parkland shooting.

But the year also has been a pivotal one for gun legislation groups: the Brady Campaign; Everytown for Gun Safety, including Moms Demand Action; and the Giffords Gun Center to Prevent Gun Violence. Twenty-six states passed gun violence prevention legislation, according to the Giffords Law Center, including 14 states with Republican governors. Compared to that, seven states approved of new gun rights laws.

The newly-in-charge House Democrats have already introduced a bill expanding background checks, though it is unlikely to be considered in the Republican-controlled Senate despite strong support from the public. Some 90 percent of Americans back such a step, according to a number of polls, and nearly three quarters of National Rifle Association members.

Shannon Watts, the founder of Moms Demand Action, noted that only a handful of legislators can block laws from being passed, as the country saw after the Sandy Hook shooting. But the Parkland students sparked an invigorated debate about gun violence that is playing out on social media and in city halls and statehouses across the country.

“I don’t think there’s any going back,” she said. “There’s no going back to the days where gun safety is the third rail of American politics.”

After Parkland, Moms Demand Action was ready to absorb the thousands of new volunteers who came forward, Watts said. The organization has more than 5 million supporters and chapters in every state, she said. Now when a gun bill is being debated in a place like Montana, for example, dozens of Moms Demand Action volunteers will show up.

“And that has really shifted the optics and the dynamics of this conversation,” she said.

Miller, a senior at Carroll Senior High School in Southlake, had researched the country’s gun lobby and gun violence prevention as part of her school’s debate team but knew of no way she could get involved. That was especially true in a more gun friendly state like Texas, she thought, though she was later surprised by how many of her schoolmates participated in a walkout.

“Until Parkland,” she said. “Parkland changed everything because the students weren’t just asking for thoughts and prayers as we’re used to hearing all the time, it wasn’t them asking for time to mourn but it was them coming out so confidently, so eloquently and becoming public figures of something they didn’t ever ask to represent. But they took on that role and responsibility.”

She said she felt that as someone with knowledge on the topic and experience in public speaking, she also had a responsibility to be an advocate.

“I also was somebody who was born in 2000 and has grown up in a post-Columbine world, and in my school I’ve had lockdown drills since kindergarten and we’ve had scares in our district,” Miller said.

When Students Demand Action was launched nationally, she joined.

“There was finally a place for where I fit into the movement,” she said.

Maren Frye, an 18-year-old in Berkeley, California, was one of the founders of the first Students Demand Action groups after the Pulse nightclub shooting in 2016. When she talks about guns, she does it in terms of making the country safe for children, she said. Gun violence is the leading cause of death among black children and teenagers, according to the Centers for Disease Control and Prevention.

“I think one of the most important things that has helped galvanize this movement is framing it in terms of a public safety issue rather than a political issue,” she said. “Because we know that the politics of common sense gun reform divides people.”

“When we talk about students’ lives and and students’ right to be safe at school it shifts that discussion,” she added.

Oscars nominations 2019: What time is the announcement, when are the Academy Awards and other things to know