Three people were rescued Sunday after their catamaran capsized in the ocean off of San Diego. The rescue happened with help from a U.S. Marine helicopter crew that was training in the area.

The captain of the Mahitabel, a 30-foot catamaran, radioed for help at 2:30 p.m. from approximately 10 miles west of Torrey Pines.

When conditions became rough, Craig Frantz realized his recently purchased boat was going to flip all the way over.

That’s when they put in the radio call that was picked up by the Coast Guard Sector San Diego join Harbor Operations Center.

A Marine Corps MV-22 Osprey helicopter crew from Marine Corps Air Station Miramar was in the area and found the boat. The crew stayed with the boaters until the Fast Response Cutter Robert Ward arrived.

They floated for about 45 minutes before rescue.

A combination of factors came together that flipped the boat over, he said.

Frantz, his friend and his friend’s child were pulled from the water and the vessel.

No one was injured in the incident, U.S. Coast Guard officials said.

Frantz said he and his friend are both very experienced sailors. He said the child became the only thing they were focused on.

“It was very, very clear that even when you do everything right and you’re prepared and you know how to handle yourself in an emergency, all you’re doing is still improving your odds,” he said. “One small thing can go wrong and you don’t make it back.”

The Mahitabel was purchased over Thanksgiving. Frantz said Saturday was a trip from Long Beach to Dana Point and on Sunday they set out to bring the boat to San Diego. 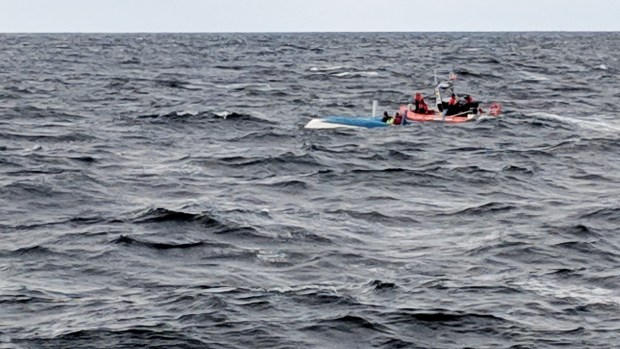 The survivors reported no medical concerns and were transferred to a nearby marina.