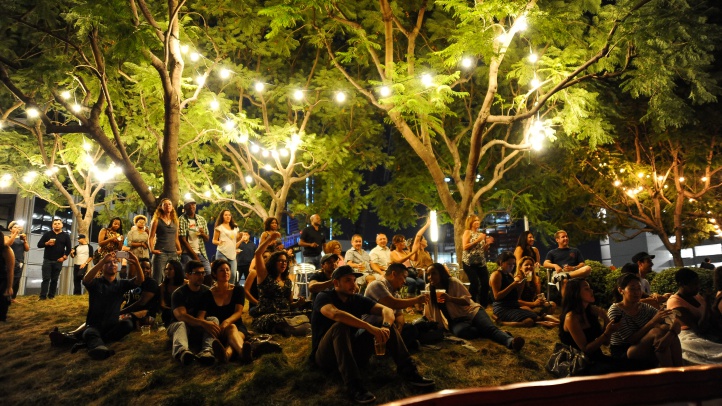 FIGFest 2019: What to do and where to go on a sublime, sun’s-still-up Friday night in June? That’s the question, but here’s a divine destination, especially if you’re in the neck o’ DTLA: FIGat7th. Why? Because the shop-eat destination will once again host a free concert each Friday night, throughout the sixth month, featuring enjoy-the-vibes acts like Cherry Glazzr, Buscabulla, and several other favorites (plus a quartet of quality openers, too). The first date for this fresh run is June 7, and it all happens from 6 to 11 in the evening. Headliners are on at 8:30 p.m., with DJ music starting and ending the nights.

Meet the Grunion: Silvery fish, small in size, will continue to shimmy onto the sands of specific beaches as summer rolls on, on several select nights. But if you’d like to take part in a program where you learn more about these wonders, which leave the ocean to spawn? You’ll want to attend a special, info-packed night at Cabrillo Marine Aquarium in San Pedro. There are just two more to come, on the 2019 schedule, so shimmy your way there on Wednesday, June 5 or Wednesday, June 19. The program, by the by, also includes a walk to beach, where you can see this epic sight in action.

Pride Poolside Movie: Pride Week is here, and while a number of terrific to-dos will fill the calendar in the coming days, there is an alfresco festivity that is both a film-fun happening and a fundraiser, too. It’s a screening of “Suddenly, Last Summer,” and it’s presented by The Standard, Hollywood and The Elizabeth Taylor AIDS Foundation. A ticket to the cinematic soirée, which will indeed take place poolside at the glam hotel on Thursday, June 6? It’s $25. A host of special guests will show, and you should show early, for cocktail hour. But if you can only stop by to catch the film, that’s at 8 o’clock.

Beta Night: Loving games is one powerful thing, and getting the chance to try out games is another also powerful thing. Put those together, in a game-packed Arts District destination, and you have this come-try-it-out event at Two Bit Circus. The diversion-filled destination debuted in 2018, but new games are being added, keeping the cool space as fresh as can be. Want to test some of those games? You can, for sure, on Tuesday evening, June 4. But do let the Two-Bit-ers know you’ll be there, by RSVPing, which is just a super-nice thing to do. Will you find your must-do new-favorite amusement?

Bonsai and Beer: There are plenty of pursuits to be found within a foam-perfecting brewhouse, outside of the sipping of beer. You can, for instance, take part in a trivia session, or see a band, or play cornhole, or maybe some sort of oversized board game, the kind where the playing pieces are as big as your head. But could you learn about bonsai? And how to care for these exquisite shrubs? You can, if you make your way to Angel City Brewery in the Arts District on Wednesday, June 5. Juniper bonsai will be the theme, and being a beginner is a-ok. You’ll also want to be 21+ and you’ll want to read up on the whole grow-tastic good time here.

Finland Is the Happiest Country in the World Again, Launches Contest for Free Trip

Strawberry Doughnuts Are Back at The Donut Man