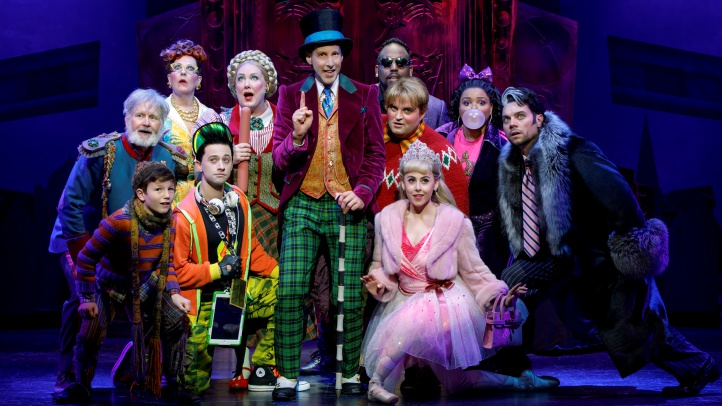 “Charlie and the Chocolate Factory”: If you grew up reading Roald Dahl’s forever-charming book, over and over, then you know it is a bit different from the Willy good 1971 film (Veruca Salt encounters squirrels, not geese, for starters). This on-stage, sweet-of-tooth spin on the story, which frolicked on Broadway, adds a few modern details — yes, a character is wielding an iPad while fame is a prevalent theme — that blend seamlessly, and satirically, into the darling but daring production. It’s more tart than sugary in places, making it just right for Dahl devotees. How to unwrap this delicious bar? Best gobble up this goodie at The Hollywood Pantages before April 14.

Antarctic Dinosaurs opens: Nope, you won’t hear stomp, stomp, stomping through Exposition Park, but if you visit the Natural History Museum of Los Angeles from April 3 through Jan. 5, 2020, you’ll learn loads about how scientists have been on a mission to “excavate fossils beneath the ice and stone” of our planet’s colder climes. For sure, you can try your own hand at excavation, and, yep, there’ll be “touchable specimens,” too. And will you venture into “the habitat where exotic dinosaurs once lived”? Best find your bravery and venture forth. How to pay for such a wonder of an adventure? Your NHMLA admission gets you dino-fied.

Palm Springs Aerial Tramway reopens: The desert can be a drier place, but on Feb. 14, 2019, a downward push of powerful rainwater caused a washout on the road to the historic up-the-mountain attraction. That meant that the tram, which is known for both its rotating cars and its zippy ascent up Mt. San Jacinto, had to shutter for several weeks. Now the repairs are done, the road has reopened, and the iconic conveyance is back in business as of April 1. Planning on calling upon the Coachella Valley for an upcoming festival? Be sure to lend the famous tram some love, if it has long been a favorite (something plenty of SoCalers have in common).

National Burrito Day: We know, every day is Burrito Day, and every evening, and every morning, because mornings just seem to be better when you’re holding a tortilla wrapped around eggs, salsa, and cheese. But the fourth day in April really and truly is National Burrito Day, and a few burrito-strong spots have deals afoot, including El Pollo Loco, Rubio’s Coastal Grill, and QDOBA Mexican Eats, which is offering its members triple the points on Thursday, April 4. Oh yeah, burritos are blissful at any time of the year, but their annual occasion supports our burrito-focused cravings in several ways.

Magic Mondays return: Let’s just say it, and, whether you agree or not, you’ll get where we’re coming from: Mondays need some additional magic. And whether we find that in a movie, or time with a pal, or an actual magic show is up to us. It just so happens that a classic Santa Monica magic show, one helmed by magician Albie Selznick, has made a regular habit of popping up on Monday nights at the Santa Monica Playhouse. As it shall again, for a fresh run of Monday evenings, beginning on April 1 and concluding on Aug. 30. A ticket? It’s forty bucks, and a bunch of top-notch enchanters’ll be waving wands during this run.