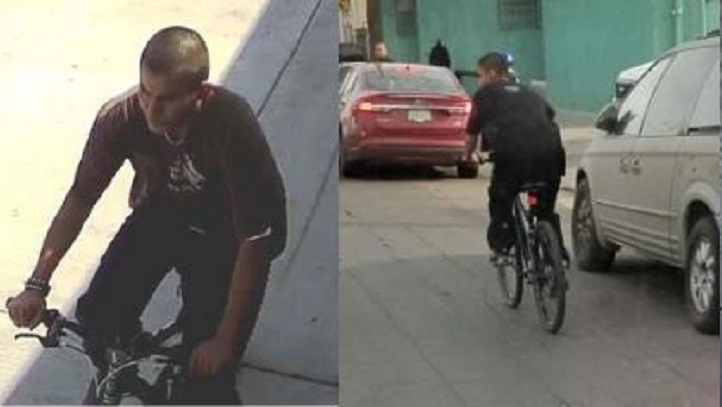 Authorities Tuesday released security video of a bicyclist sought for slashing four people in the face while riding past them — three in the South Los Angeles area and one in South Gate.

Two of the crimes occurred on Monday, the first about 8:40 a.m. near Florence Avenue and Avalon Boulevard in the south Los Angeles area, the Los Angeles Police Department reported.

“The victim was standing on the sidewalk near the bus stop,” according to a police statement. “The unknown suspect approached the victim on his bicycle and slashed at the victim as he rode past him with an unknown-type edged weapon, causing severe injury to his face.”

About 15 minutes later, a woman was slashed in the face near Avalon Boulevard and 59th Place.

“The victim reported that a male suspect on a bicycle slashed her face with an unknown object as he rode past her, causing severe injury to the left side of her face and ear,” the LAPD reported.

On March 20 about 7:30 a.m., a man was slashed in the face by a bicyclist near Avalon Boulevard and 59th Street in south Los Angeles.

And on March 27 about 11 a.m., a person was severely injured when slashed in the face in South Gate.

The slasher was described as about 18 to 30 years old, 5-foot-6 to 5-foot-8 and weighing about 150 pounds, with short hair. He was riding a mountain bike.

IPAs Get Their Own Hoppening, er, Happening

It’s Raining Awards: NBC4 Has the Most Accurate Forecast Again