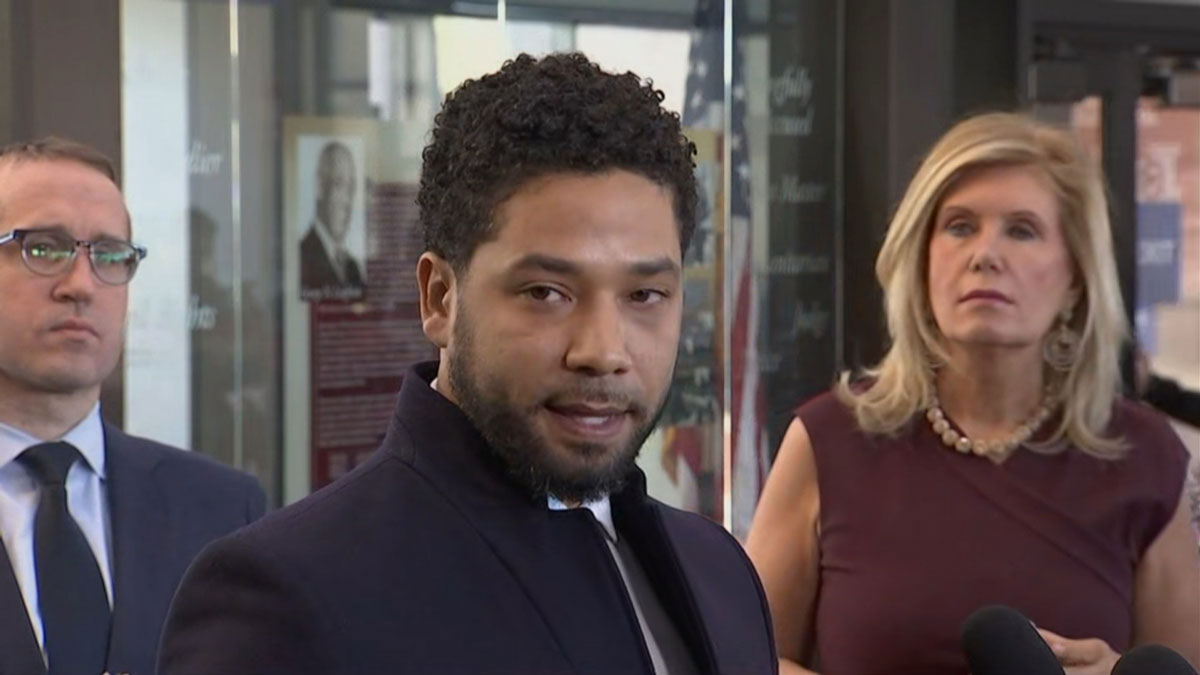 All criminal charges against Jussie Smollett were dropped Tuesday and the “Empire” actor’s record will be expunged, nearly two months after Smollett reported suffering an alleged hate crime attack in Chicago.

“This has been an incredibly difficult time, honestly one of the worst of my entire life,” Smollett said while making a brief statement to reporters after an emergency hearing in which a judge agreed to drop the charges and expunge the case.

But among the questions that weren’t immediately answered was whether prosecutors still believe Smollett concocted the attack and whether there’s new evidence that altered their view of events. Typically, a minimum condition of dropping cases is some acceptance of responsibility. In a statement, the Cook County prosecutors’ office offered no detailed explanation.

In announcing the statement attorneys Tina Glandian and Patricia Brown Holmes said “Today, all criminal charges against Jussie Smollett were dropped and his record has been wiped clean of the filing of this tragic complaint against him.”

“Jussie was attacked by two people he was unable to identify on January 29th. He was a victim who was vilified and made to appear as a perpetrator as a result of false and inappropriate remarks made to the public causing an inappropriate rush to judgement.”

“Jussie and many others were hurt by these unfair and unwarranted actions. This entire situation is a reminder that there should never be an attempt to prove a case in the court of public opinion. That is wrong. It is a reminder that a victim, in this case Jussie, deserves dignity and respect. Dismissal of charges against the victim in this case was the only just result,” the statement continued.

“Jussie is relieved to have this situation behind him and is very much looking forward to getting back to focusing on his family, friends and career,” the attorneys’ statement ended.

Smollett added, “I want to thank my family, my friends, the incredible people of Chicago and all over the country and the world who have prayed for me, who have supported me, who have shown me so much love,” Smollett said in a brief statement to reporters.

“No one will ever know how much that has meant to me and I will forever be grateful,” he continued. “I want you to know that not for a moment was it in vain. I have been truthful and consistent on every single level since day one. I would not be my mother’s son if I was capable of one drop of what I have been accused of.”

“But I am a man of faith and I am a man that has knowledge of my history and I would not bring my family, our lives or the movement through a fire like this. I just wouldn’t,” he said, thanking his legal counsel and the state of Illinois for “attempting to do what’s right.”

“Now I’d like nothing more than to just get back to work and move on with my life but make no mistakes I will always continue to fight for the justice, equality and betterment of marginalized people everywhere,” he added before departing the courthouse, taking no questions.

A representative for the Cook County state’s attorney’s office said in a statement that the decision to drop the charges was made “After reviewing all of the facts and circumstances of the case, including Mr. Smollet’s [sic] volunteer service in the community and agreement to forfeit his bond to the City of Chicago.”

“[W]e believe this outcome is a just disposition and appropriate resolution to this case,” the statement added. State’s Attorney Kim Foxx recused herself from the case in February, with documents obtained earlier this month via Freedom of Information Act request showing that Foxx had asked Chicago Police Supt. Eddie Johnson to turn the investigation over to the FBI.

Smollett pleaded not guilty to multiple disorderly conduct charges earlier this month. He was initially charged with one felony count of disorderly conduct in filing a false police report in February, with Chicago police alleging that he staged a hate crime attack on himself the month before because he was “dissatisfied with his salary.”

A Cook County grand jury then indicted Smollett on 16 felony counts in connection with his reporting of the alleged attack he claimed to have suffered in Chicago’s Streeterville neighborhood.

The lawyer for the brothers, Obabinjo Osundairo and Abimbola Osundairo, said the pair had evidence backing their claim that he orchestrated the attack. Smollett’s lawyers said “misinformation” had been reported in the case and said they planned to prove a lack of evidence in the case.

A representative for the brothers’ legal team said their attorneys were reviewing the developments in the case.

Smollett’s family said in a statement that the actor “is an innocent man whose name and character has been unjustly smeared,” saying that “truth has prevailed and he has been vindicated.”

“The painful incidents we’ve witnessed him endure over the past 7 weeks have been heartbreaking and unjust to say the least,” his family’s statement continued. “While many were quick to rush to judgement before hearing the actual truth, we are grateful that the truth about Jussie has come to light. We look forward to bringing the real perpetrators to justice. We thank God and our village for standing by us during this trying time.”