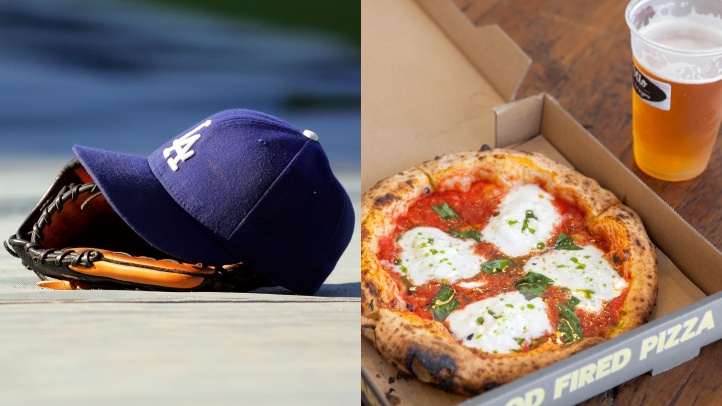 DTLA is just the shortest of scoots from Dodger Stadium, and plenty of Big Blue buffs’ll make their way to the area, on March 28, all to be near the Opening Day action.

Both Philippe the Original and Boomtown Brewery‘ll have festivities going, in fact, but if you find yourself at Grand Central Market, and you’re in a mood to mark baseball’s biggest holiday, best find your way to the five market vendors below.

Why? Because they’ll all have a little something happening in honor of Opening Day, though take note of any special “asks” that particular spots have (like arriving at a particular time or showing up in your Dodger-blue clothes).

At Olio? Look for a pizza-beer combo going for a tenner, all day long on March 28. The pizza types to choose from? A pepperoni or a three cheese. And the brew is draft (yep, a single brew is part of this deal).

Sporting your Dodger t-shirt, hat, more? Stop by Berlin Currywurst for a $5 beer.

Purchase a combo plate at Roast to Go and snag a complimentary 16-ounce drink.

In the mood for seafood? Prawn is doing it up on Opening Day with a daylong happy hour vibe.

And if you’re one of the first 150 customers at Golden Road Brewing — that’s customers, so don’t plan just a stop-and-hi-by — you snag a Dodgers rally towel, oh yeah.

Nearby all of this GCM fun, in Chinatown? LA WINE has five-buck beers for those people showing a Dodgers ticket, as well as discounted bottles of wine. Note the opening time, though: 5 o’clock, so make this a post-game visit.

Happy Opening Day, Dodger peeps, whether you go GCM, for these sweet deals, another local spot for celebration and camaraderie, or, yep, the stadium for that first exciting early-afternoon pitch.