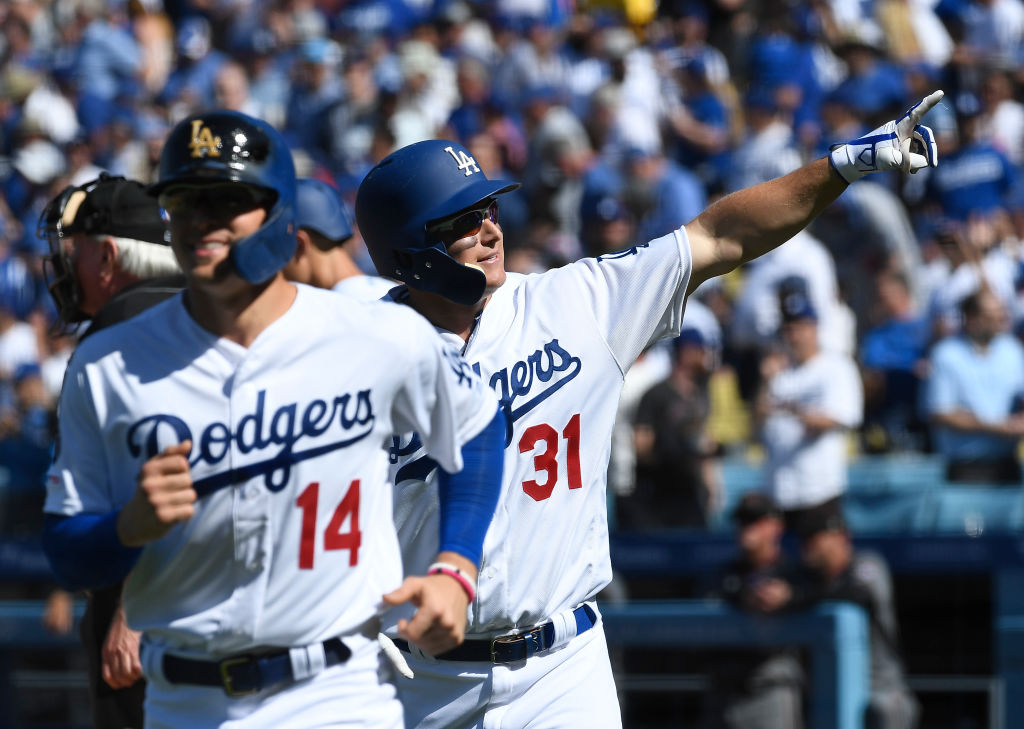 The ball was flying, Randy Newman was playing, and there was an electric feeling in the air as baseball returned to Dodger Stadium on Thursday afternoon.

From the moment the all-encompassing C-17 flew over the giant unfurled American flag at Dodger Stadium, as direct and unwavering as the path of a homing bird, the sellout crowd of 53,086 in attendance knew it was only a matter of moments until they heard the immortal words of Vin Scully usher in another year of Dodger baseball.

What they didn’t know was that they would witness history on a day that literally could not be any more different than Opening Day nearly one year prior.

Clayton Kershaw took the mound a year ago for a franchise record eighth consecutive Opening Day start. He would throw six innings of one-run ball, with his only blemish being a solo home run that wrapped neatly inside the right field foul pole like a prized bow on your favorite Christmas present.

Joe Panik’s solo shot would prove to be the only run—and only home run—in that game, as the Dodgers were held scoreless on Opening Day for the first time since 1997.

What a difference a year makes.

Facing a familiar foe in former teammate Zack Greinke, the Los Angeles Dodgers belted a franchise-record eight home runs on Thursday to shatter the all-time MLB record of six, set by the 1988 New York Mets and the Chicago White Sox, who tied the record on Opening Day last season.

“I don’t know if the balls are juiced, or the ball was carrying today, but the ball was going far. We were all wondering if that was a record,” said second baseman Enrique Hernandez, who hit two of the eight home runs himself. “Now that I know that it is, that’s cool. We’re definitely off to a better start than last year.”

Los Angeles led the National League in home runs last season with 235, and they set a NL-record with seven different players each with 20 homers or higher. Needless to say, hitting a franchise-record eight home runs in one game felt as familiar for the Dodgers as reciting the alphabet, and it was business as usual in the clubhouse after the game.

“We can enjoy right now, but we have to come back tomorrow and play again,” said Pederson who finished 3-for-4 with a double, two home runs and four RBI. “It was a solid day for everyone. We saw the ball really well and put some good swings on it. We have a high-powered offense, and that’s what we’re capable of.”

If you thought the Dodgers offense had enough firepower last year, they now have an offensive arsenal equal to that of a destroyer, as they hired three new hitting coaches in the offseason, led by a 32-year-old cutting edge swing guru named Robert Van Scoyoc.

Van Scoyoc has never been a hitting coach at any level, and didn’t even play baseball beyond college, but he’s helped turn the swings of Chris Taylor, and J.D. Martinez around in recent years.

Van Scoyoc and friend Craig Wallenbrook are responsible for the popularity of the new “it word” in baseball: launch angle. Tolling away for years in Santa Clarita, the duo developed an analytical approach to figuring out a player’s launch angle and how to maximize the most angle from a swing by keeping the bat through the zone as long as possible. It’s now become a mainstay in front offices across Major League Baseball.

“Robert and Brownie [Brant Brown], their strengths are mechanics and swing paths, and stuff like that,” said Pederson who has been working with Van Scoyoc throughout the spring. “If you get in a good routine with them, dialed in, and work on consistency, and getting off a good swing, then you’re going to have success.”

Cody Bellinger, the 2017 National League Rookie of the Year Award winner, is counting on that success. After clubbing a team-high 39 homers in his rookie campaign, Bellinger took a step back last season with just 25 home runs in nearly 90 more at-bats.

“They’re getting me back to basics,” Bellinger said of his work with Van Scoyoc and Brown. “I understand what I’m doing every day and making minor adjustments throughout my base that I have, and I’m just understanding my swing better.”

If the Dodgers new hitting strategy remains successful, they can surpass the New York Yankees record of 267 home runs set last season as easily as the turn of a hand or the flick of a wrist.

As ball after ball was sent skyrocketing into the Chavez Ravine stands, the celebrations became commonplace, the cheers more incredulous, but the belief that this newest rendition of the Boys in Blue could possibly be the team that breaks the championship curse were confirmed.

It may just be game 1 of 162, but it felt different this year, and that means something for the hopes and dreams of a city in waiting.

Angels, Dodgers Fans Will Get to Games Easier This Season With These Transportation Partnerships

Julian Edelman Shaves Off Beard for Charity on ‘Ellen’ Show