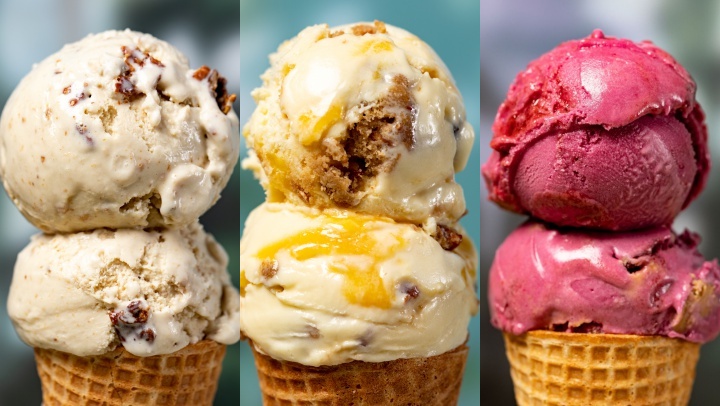 Going camping? Then you know all about the economy of space.

That space might be in the trunk of your car, or on the roof of your wagon, or inside your tent, or even your sleeping bag.

You’re not going to waste a centimeter during your trip, all so you can maximize your time and enjoyment in the Great Outdoors.

What if there was also a way to pack some of the quintessential tastes of a camping trip — s’mores, bacon, beans — into a frosty favorite of the outdoors, a scoop of ice cream?

Wouldn’t that also be, in a way, quite the space-saver?

Ponder that as you turn your kayak in the direction of the nearest Salt & Straw, which is featuring five flavors based on the classics of camp-out cuisine, almost all June long.

The “almost” part? You’ll want to get to one of the boutique scoop shops — there are locations on Larchmont, in the Arts District, and in other spots around Southern California — by Sunday, June 28.

For sure, those are real mushrooms in the Mushroom Muddy Buddies (they’re candied, even) and the Wild Fennel Amaro Milk-Sorbet boasts flavors of the forest, like juniper.

Have you folded a blanket, swimsuit, and gear into a tiny backpack before?

Then you can fold in a few minutes to stop by your local Salt & Straw for a scoop or two for some of the summeriest tastes around.

And have you ever really had BBQ sauce and beans combined with ice cream? Don’t try and claim that you never mixed a few offbeat ingredients in your cast iron pan, over a crackling campfire, on a starry June night.

It was good, too.

El Cap to Screen 22 Marvel Movies in a Row