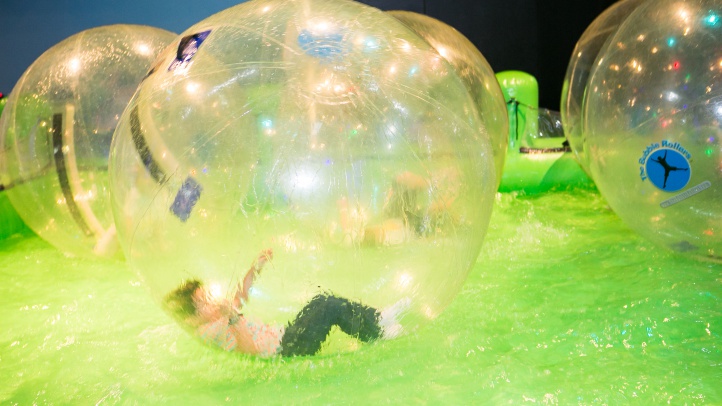 Standing inside a bubble?

That’s probably not something that’s going to happen to you today, or any of us, though there are exceptions.

If you’re a good witch, a large bubble might be your main mode of zipping around from one enchanted land to the next. And if you’re a tinier bubble, you might find yourself encased inside a larger bubble, which sometimes happens.

But there is a time of year that is bountiful with bubbles, for those bubble buffs that need to commune with the cool, lighter-than-air spheres.

The soapy scene happens each spring in Santa Ana, at Discovery Cube Orange County, which is where Bubblefest comes to rest, like a soap bubble on one’s palm, over several science-cool weeks.

Those weeks begin on Saturday, March 30 and pop on April 21, just about the time when spring break wraps for everyone.

What can bubbly types expect, should they float by this activity-filled event?

The Mega Bubble Courtyard is always bustling with bubble-making fun, while the Bubblefest Zone is “… where the whole family can learn bubble science from surface tension, elasticity, air pressure, and geometric properties.”

There are some special to-dos, too, on select days, like a Bubblefest Laser Show, as well as the Bubblefest Family Night on April 12.

Want to be well-rounded, like a bubble? We won’t run you in circles nor soap things over: This is where you can find out more of this ever-popular spring spectacular.

It’s an exhibit of iridescent beauty, but one with plenty of science cred, too. So “pop” by before this beautiful bubble of a bash must again burst.

‘Love Stations’ to Valentine’s-up a 99 Cents Only Store

'Mammoths and Mastodons' Now Tar-Pitting Up Our Lives