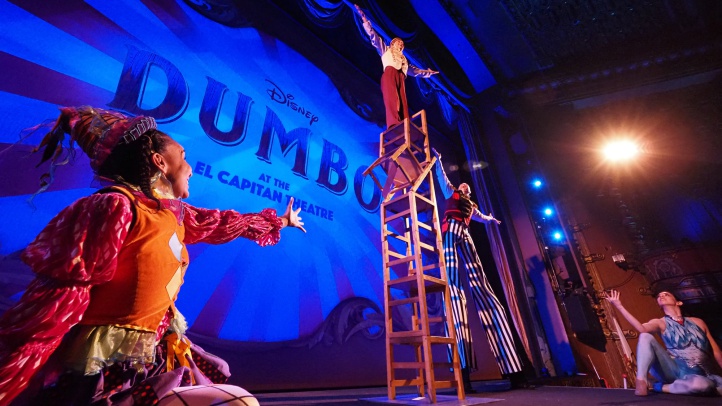 It’s big. And, yes, saying “it’s big” can go both for the mega granite wonder-rock in Yosemite Valley and the historic cinema on Hollywood Boulevard.

The Tinseltown El Cap is, yes, notably smaller than Yosemite’s massive El Capitan, but the theater is frankly cavernous as far as capacious movie houses go.

The cinema could, quite convincingly, double as a big top, at least in size. Nope, El Capitan Theatre doesn’t boast old-school canvas walls, but rather ornate carvings and such. But its roominess would lend well to a show filled with feats and acrobatic wonders.

Which is why it feels like a fine and fantastical fit for a sweet circus act to pop up in this palace of cinematic wonders, which is exactly what will happen from March 29 through April 21.

That’s when Disney’s live-action “Dumbo” lifts its large ears and flies for the iconic landmark. And, as befits the magical nature of the Tim Burton-directed flick, there shall be live circus to enjoy, too, with each screening.

Not during the film, of course, but a short, circus-themed segment will enchant audiences before each screening, so be sure to take your seat in a timely manner.

Arrive early for that popcorn, that drink, or bathroom visit, is what we’re saying.

Tickets? You don’t need to whirl through the air like a gifted pachyderm to purchase your entry. Rather, you can do so at the El Capitan site.

One more cool feature of this three-ringed fantasy? Costumes from the movie will be on display at the cinema, too, so make time to stroll by the effervescent outfits seen on screen.

Weekend: Our Mega Marathon Is Here